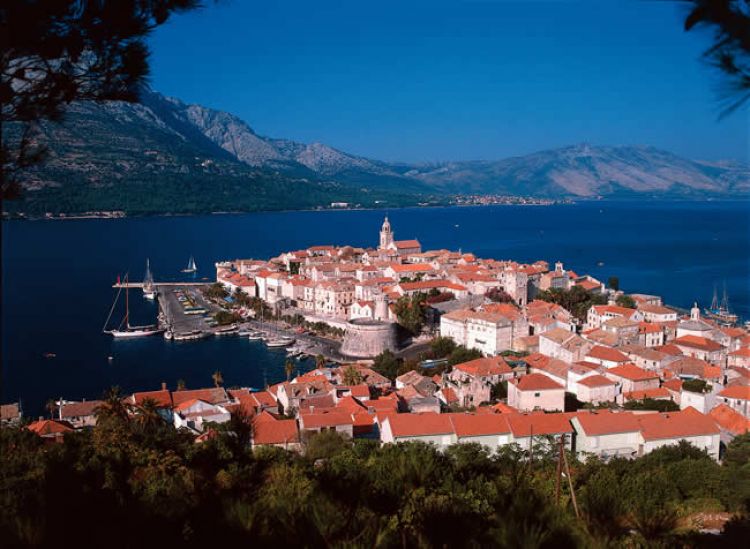 1 DAN
TROGIR - KRKNJASI ISLETS - SESULA COVE - ROGACIC COVE - VIS (30 NM)
Leaving Trogir you start to think about stopover options on the way to Vis. After six miles you have opportunity to swim on the anchorage in between Krknjaši islets. It is well sheltered from winds blowing from W and NW. Avoid it when blowing from E and SE, if is so you can proceed to anchorage northwestward of Saskinja islet, also nice place for swim brake. Ten minutes separates you from the cove of Sesula, nature's sheltered anchorage, even safe for over night stay. If you would not like to stop at the beginning of the leg, choose 23 miles far Rogačić cove on the Vis island. It is quiet small bay just two miles away from town of Vis, where you going to spend night. Find mooring in the SW part of the harbour. Facilities - mooring lines, fuel, electric power, pharmacy, medical service, restaurants, and grocery. Water in limited supply. *Before then you set off Vis, take look at weather forecast, and be sure that you would not be caught in strong SE. In the case of sirocco we suggest you to change itenerary. Stay another day in Vis or turn your bow towards Stončica cove, well protected anchorage and very good departure point to reach Palmižana, from where you can proceed to Vela Luka.

2 DAN
VIS - BISEVO - KOMIZA (19 NM)
During stabile weather conditions the destination for today will be Komiža, small fisherman's town, eleven miles from Vis. First head for island of Bisevo (if the weather is strong or cloudily we advice you to avoid it) and its renowned Blue Cave on the east shore. They are best seen on a sunny day at midday. As the sun comes overhead, white rocks on the bottom are lit up from underneath and all the caves turn blue and the water turns silver. Take your boat and call for guided tour in a fishing boat and pay few kuna. Do not forget to take masks and snorkels as you can swim from the fishing boat once inside. It is best to leave one person on board the boat circling. Do not anchor in front of the cave, because it is very deep. You can stay till early afternoon. Keeps on mind that numbers of berths in Komiža are limited. Breakwater is fitted with mooring lines. Facilities - water and electric power on the quay, grocery, restaurants, pharmacy.

3 DAN
KOMIZA - ZAGLAV COVE - BUDIKOVAC ISLET - PROIZD ISLET - VELA LUKA (32 NM)
Sail along south-east shore of island and make decision to stop after hour and half or reach island of Korcula first. Budikovac islet is thirteen miles from Komiza, nice stop over for swimming as well as cove of Zaglav, situated half mile away. Alternatively proceed to islet of Proizd. Anchor in narrow passage eastern of islet, later in the afternoon head for Vela Luka, small town situated on the head of the bay. The harbour is sheltered from all winds, but strong wind from west direction sends in waves. There is few mooring lines, but if you do not get one, drop the anchor and come with stern to the quay. Facilities - all facilities.

4 DAN
VELA LUKA - MRCARA ISLET - PASADUR (20 NM)
Get out of the Vela Luka bay and head south towards to island of Lastovo. Come between two islets named Mrcara and Prezba. There is an opportunity to take a break on the anchorage by eastern shore of Mrcara islet then enter to bay of Velji Lago. Pasadur is just point where Prezba islet joins on to Lastovo. Moor on a quay in front of hotel. The town of Lastovo is situated at the inner part of the island, and it is like going back in time, to a small rural village. Facilities - no other facilities but restaurants. Provisions are available from the Ubli, village situated on opposite side of the bay. There is a small fuel quay.

5 DAN
PASADUR - ZAKLOPATICA COVE - SAPLUN ISLET - POMENA (27 NM)
Sail around islet of Prezba and follow the north coast of Lastovo. Enter to Zaklopatica cove using the eastern passage. This is small pretty cove, very sheltered except in bora (NE). This is also the best departure point to reach the town of Lastovo, of course if you want to stretch your legs. In the swimming season you should not miss Saplun islet and its lagoon on the north side of the islet. Approach to the lagoon from the northeast direction. Drop the anchor and enjoy in clear blue water. In the afternoon continue to head east to Mljet. Mljet is beautiful wooded island and place where Odysseus was kept prisoner for seven years by the nimph Calipso. Pomena is the main tourist resort on the island, therefore is difficult to find berth along the seafront outside the hotel. The seafront continues to the wide quay reserved for numerous day-trip passenger boats. If is quay crowded, anchor in south part of the bay or on other side off the islet of Pomestak and take stern lines ashore. The reason behind the crowded quay is the magical appeal of Mljet's nearby lakes, and you will certainly not be an exception when it comes to visiting them. Ten minutes of walking in the deep shade separates you from the lakes, most beautiful part of the island as a whole, this area has been designated as a national park. There are two lakes, Malo and Veliko Jezero, and you will find the water in the smaller lake is always 3-4 degrees warmer then sea. In the middle of the larger lake is an islet with Benedictine monastery, which can be visited by boat, which runs 4 times a day. Facilities - no other facilities but restaurants.

6 DAN
POMENA - PROMONTORY OF LENGA - POLACE (4 NM)
Stay on Mljet for another day and sail to Polace (name of village coming from palaca, meaning 'palace', because of Roman ruins which were once the house of the local governor). Enter to bay of Polace in between Promontory of Stupa and Moracnik islet. Keep away from a rock, which lies one cable north- north-westward from Moracnik islet then proceed round of Lenga promontory. Southward of Lenga is nice anchorage for swimming break. In the afternoon find mooring at the quay on the south side of the bay, or if you prefer quietness anchor in north-west part of bay. Pay attention on the rock just to northeast of the ruined palace. Facilities - bars, shops and restaurants. As the island is so popular you will find that food is a little more expensive here.

7 DAN
POLACE - PRZINA COVE - LUMBARDA (16 NM)
Leave Mljet heading west to eastern point of Korcula. In the swimming season take a break in Przina cove, situated three quarters of a mile westward from Raznic promontory. There is a sandy beach surrounded by vineyards. Spend a night at Lumbarda, village around the corner. There is a marina. Full facility.

8 DAN
LUMBARDA - BADIJA ISLET - KORCULA (3 NM)
This leg of your cruise is very short so you have plenty of time to spend around islets on way to town of Korcula. One of anchorages is southward of Badija. Building on the islet is an old Franciscan monastery, it used to be sports centre but is now empty and run down. Korcula town is known as the little Dubrovnik and is recognisable by its round defence towers and cluster of red roofs. It is one of the best preserved towns from the Middle Ages in the Mediterranean area and it is also the alleged birthplace of Marco Polo. Since time immemorial the inhabitants of Korcula have been known as skilled stonemasons, shipbuilders and seafarers. Moor at ACI marina. Full facility.

9 DAN
KORCULA - KNEZA BAY - SCEDRO ISLAND - PALMIZANA (36 NM)
This is a long leg so plan your day. Our suggestion is to leave Korcula early in the morning and plan to stop after a one hour (Kneza) or after 4 - 5 hours of sailing (Scedro). Bay of Kneza is the nice spot for swimming, there are two islets; Vela and Mala Kneza and you will choose anchorage depending of prevailing wind. Scedro is the next stop over option for the lunchtime on the way to Palmizana. Enter in the cove of Lovisce and anchor in the side inlets. There are few restaurants open during top season and that could be also place for over night stay. In the height of season ACI Marina Palmizana might be very crowded so try to enter in till 5pm. Palmizana lies in an attractive bay on St. Klement Island, the largest island in the archipelago named Paklinski Islands, actually meaning 'Hell Islands' and it is a favourite destination of boaters in the Adriatic. There is a water taxi between here and Hvar Town, which usually runs till 11pm, and this is the best way to visit that touristy and historic harbour with the oldest public theatre in Europe. Facilities-electric power and water in limited supply, restaurants.

11 DAN
STARI GRAD - ZUKOVA COVE - VRBOSKA (16 NM)
Get out of Stari Grad bay and turn your bow to east. Four miles and half away of Kabal promontory you have opportunity to anchor in Zukova cove. There are another seven miles to be sailed along shore to Vrboska, village situated at the head of a long, narrow cove. ACI marina is on outer part of the cove. Full facilities.

12 DAN
VRBOSKA - BLACA COVE - MILNA (20 NM)
This day, after a night in Vrboska, will be spent sailing to Brač. Cross the Hvar channel and try finding a cove to take a break. Blaca is nice, but not protected from SE winds. When sirocco pick up, keep on heading to promontory of Ražanj, and anchor a mile westward of Milna. In the evening take a mooring in ACI marina. Full facilities.

13 DAN
MILNA - NECUJAM - TROGIR (19 NM)
Nečujam can be stop over on the last leg of your cruise. It is a very sheltered cove situated on the north part of Šolta Island. Anchorage is on the head of a cove. Pay attention on submerged walls at the bottom of the cove. Those walls are remains of Roman fish farm. There are twelve miles left to reach Trogir.