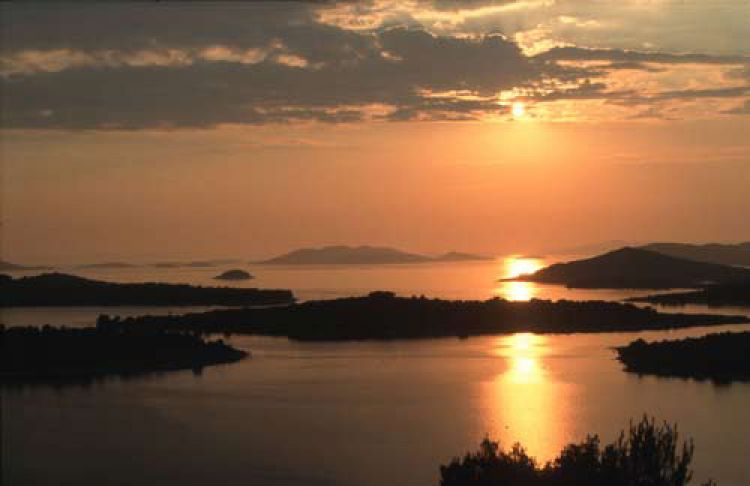 1 DAY
ROVINJ - POMER - (27 NM)
Rovinj: With its fortified double walls and three Town Gates from the early Middle Ages, Rovinj presents an example of urban architecture of the Mediterranean type. The church of St. Euphemia, with the statue of the patron saint of Rovinj standing on its 60m high bell tower, dominates the town. All the Rovinj coast and the surrounding 22 islands and islets are a protected natural heritage. Besides all the beauties of its hidden corners, this green paradise provides everything a modern tourist may wish for. Pomer is located on the western side of the Medulin Bay. It was settled in Roman times, which is confirmed by well-preserved excavations of Roman villas and the remains of a thermal spa. Of the historical monuments, the Church of St. Flora from the Byzantine period stands out. Pomer was once well known for raising and breeding of fish and molluscs, and today there are many seafood restaurants as a result of this.

2 DAY
POMER - OSOR (23 NM)
Osor is the small town today but as such completely itself as "a city museum". Its length and straitens as a rampart between the west Adriatic land and the East makes this town the crossing of the roads that go from the West to East part of the islands Cres and Lošinj. A narrow band of few tenths of meter of land, which used to link the two islands Cres and Lošinj, was favourable to trading development and was also creating a safe port. During antic period and Romans ruling Galleys would come and reload their cargoes so that the ships on the other side could take it farther. A channel was ditched through. It was the first movable bridge, which today also serves modern seafarers by making their route shorter.

3 DAY
OSOR - RAB (23 NM)
The island is one of the most densely wooded islands in the Adriatic and is a veritable botanical exhibition, with plants not native to the island. The Komrcar Park, with its laurel, poplar, cypress, Indian fig tree, and rosemary, pine and hundred-year-old agaves is now the pride of Rab. Its more than 300 freshwater springs provide a valuable water supply to the population of the island--which, in contrast to most of the Adriatic islands, is increasing, in part because of good communications with the mainland. Because of these numerous springs, Rab is considered to be the greenest island in the Adriatic.

4 DAY
RAB - PREMUDA  (27 NM)
Premuda: These island is situated west of Dugi Otok, covered with macchia and dense vegetation, with numerous little coves and exquisite beaches washed by crystal-clear sea. The island represent a genuine peaceful oasis and are an ideal refuge for all those who want to escape everyday life, particularly if they have their own or a rented boat. The sunken wreckage of the ship Sveti Istvan in the waters near Premuda is an inviting challenge for experienced divers.

5 DAY
PREMUDA  - BOZAVA  (18 NM)
Božava: Village with a small harbour and a tourist resort on the NE coast of the island of Dugi Otok.

6 DAY
BOZAVA - TELASCICA  (25 NM)
Immersed in luxuriant greenery, the secluded and exceptional world of Telascica Nature Park attracts the curious and connoisseurs to surrender to the natural park of Dugi Otok, to bathe in the medicinal waters of Mir Lake, a rare example of a salt-water lake on an island, saltier and warmer in summer than the nearby sea, or to bask in the shade of branching pines whose bows stretch above the sea. Telascica has been inhabited since ancient days, as can be seen from Roman remains in Mala Proversa , and numerous pre-Romanesque churches. This and much else attracts visitors to Telascica Bay, a Nature Park of the Republic of Croatia and a place where nature enjoys a high degree of protection, which it well deserves.

7 DAY
TELASCICA - PISKERA – KORNATI NATIONAL PARK (15 NM)
The Kornati: a labyrinth of sea passages and islands, were formed from a cluster of white rocks that God was left with when He had created the world. He just dropped them into the sea, looked back and decided that no corrections were needed. (Folk Legend).
Famous for their uniqueness and beauty, the Kornati Islands are practically uninhabited. Only in the warmer parts of the year they became a temporary home for fishermen and farmers and as such are the perfect destination for those fond of vacationing in complete silence and tranquillity. The Kornati Islands consist of some 140 islands and reefs. The most famous characteristic of the archipelago are the cliffs, which cut the coasts of some islands, descending vertically to the depths of the sea, sometimes up to a hundred meters in some places. The island group is unique for its beauty. Several small fishing settlements and huts are occasionally inhabited. Proclaimed as a national park, Kornati is extremely rich in fish. Since these islands are especially attractive to seafarers, the nautical centres of Zut and Piskera were built. The national park of Kornati, as a part of nature of special interest to the Republic of Croatia, has specific rules and regulations that all visitors must respect.

8 DAY
PUSKERA MURTER VILLAGE OF JEZERA - (17 NM)
Among these islands, the picturesque Murter, an island of fishermen, olive-growers and shipbuilders, is also important. It is connected to the land with a 12 kilometre-long drawbridge near Tisno. With is coastal settlement of Hramina, which was developed around a vast and wooded bay, and the sandy bay of Slanica, with its hotel and camp in the pinewoods, Murter is the largest tourist settlement of the island. Three more tourist settlements are worth visiting: Betina, Tisno and Jezera. Prvic, near the tourist settlement of Vodice, is an oasis of Mediterranean flora and fauna. Jezera : is a bay situated on the NE coast of the Island of Murter. Its name derives from the Croatian word jezera - lakes, that the large ponds in karst recesses resemble after heavy rainfall. This is an exception though in the summer when the area offers plenty of sun, a magnificent beach, freshly caught fish served in the many restaurants and a very pleasant way of vacationing. The more experienced sailors can discover the beauties of the island's attractive coves.

9 DAY
MURTER - ZADAR (25 NM)
Zadar - the centre of exciting natural contrasts and rich historical traces, the main centre for the region; one of the oldest towns on the Adriatic coast, centuries old political, commercial and cultural metropolis of Dalmatia. This town of a high spiritual and material culture, turbulent history, long maritime tradition and a well developed tourist life, has been living on, although many armies passed through it, although it was repeatedly destroyed and rebuilt, although it was visited by popes, sovereigns, artists, scientists and architects. The rich and turbulent history of Zadar is reflected in its numerous monuments to the spirit and culture of the town. There are several layers of town walls and fortifications, parts of Roman Forum, churches dating from early Christian, Roman, Gothic, Renaissance and Baroque periods, and famous collection of sacral silver and gold objects. The tourist region of Zadar, prides itself on the realm of natural parks and islands. Quiet and sheltered bays, various types of beaches (sand, pebble, rook) account for roughly 1200 km of the seashore. A century long tourist tradition is a guarantee to meet every need of the guests. Finally, one more thing should be said, that is "Zadar has s nicer sunset than California" -- so said Alfred Hitchcock in 1964.

10 DAY
ZADAR - SILBA  (28 NM)
Silba is an island of captains and ship-owners, whose old captains' houses are found in the settlement with the same name. Situated in the centre of the island, on the eastern and western sides of the thinnest part of the island, the village has a port, which is well protected from the wind year-round. Nearby are the three islands of Grenebi, which serve as a geomorphologic reserve. Meanwhile, Ist is an island of fishermen and sailors, well known to seafarers as a safe refuge. Molat has numerous bays, the most famous being the one at Brgulj where the English king, Edward VIII, found a safe harbour while cruising around these islands.

11 DAY
SILBA - MALI LOSINJ  (19 NM)
Mali Lošinj is known by its sea tradition, its special climate that cured the first visitor of the climatic medical centre in 1885. This tourist tradition was started and supported by many honourable men of this archipelago. The bridge which is placed at the entering to Mali Lošinj, above the channel which was ditched through the narrowest part of the island, makes two separated peace's of land that are connected by the movable bridge. It makes possible for smaller boats and yachts to enter the port.

Routes on the middle Adriatic sea - 1...