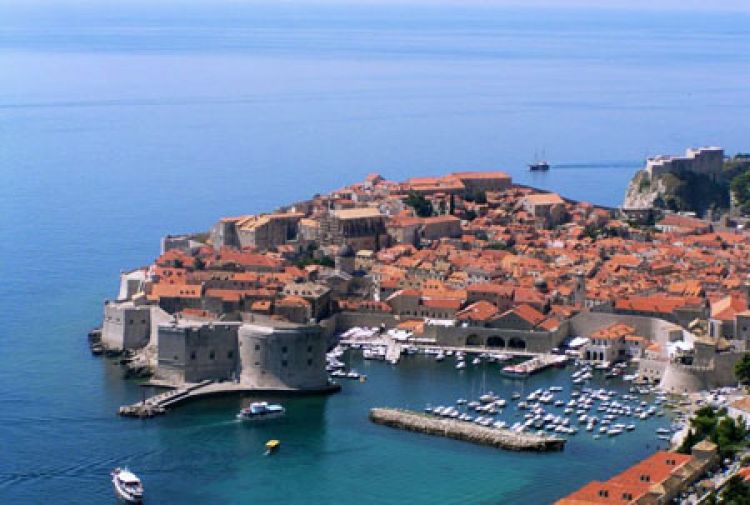 1 DAY
DUBROVNIK - PODSKOLJ / (SAOLUNARA , BLACA) - OKUKLJE (20 NM)
For first day you can turn your bow toward eastern side of Mljet, which is beautiful wooded island, and place where Odysseus was kept prisoner for seven years by the nimph Calipso.
Before than you reach Okuklje, make break at one of bays. Saplunara is the cove situated westward of Gruj promontory or Blaca, very small cove in between Saplunara cove and promontory. You can enter into small cove only by dinghy. Anchor your boat at the entrance of the cove with one eye on it. You should avoid those coves when you got S - SE winds. Saplunara is good for over night stay under anticyclone weather system only, what means winds from NW - NE.
Another option for break is Podskolj, small channel in between Skolj islet and Mljet island. Find anchorage in the middle of small channel.
In the afternoon sail another 4 - 5 miles to Okuklje. It is small village in the cove with few restaurants and small grocery shop. No water. Tie up with stern to quay. The cove is well protected from all winds.

2 DAY
OKUKLJE - SOBRA / (MORACNIK ISLET) - POMENA (6 NM)
Continue sail to northwest then after half hour sailing you have opportunity to stop by in Sobra bay, village and main harbour on island. If you want swimming break drop the anchor in the NW part of bay, it is deep for anchoring but possible for an hour or two. Fuel pump is on eastern part of bay.
Another anchorage for swimming break is islet of Moracnik situated at the entrance of Polace bay. You will choose your side depending on prevailing wind.
Pomena is the main tourist resort on the island, therefore is difficult to find berth along the seafront outside the hotel. The seafront continues to the wide quay reserved for numerous day-trip passenger boats. If is quay crowded, anchor in south part of the bay or on other side off the islet of Pomestak and take stern lines ashore. The reason behind the crowded quay is the magical appeal of Mljet's nearby lakes, and you will certainly not be an exception when it comes to visiting them. Ten minutes of walking in the deep shade separates you from the lakes, most beautiful part of the island as a whole, this area has been designated as a national park. There are two lakes, Malo and Veliko Jezero, and you will find the water in the smaller lake is always 3-4 degrees warmer then sea. In the middle of the larger lake is an islet with Benedictine monastery, which can be visited by boat, which runs 4 times a day.
Facilities - no other facilities but restaurants and small grocery shop. As the island is so popular you will find that food is a little more expensive here. No water.

3 DAY
POMENA - PRZINA COVE / (BADIJA ISLET) - KORCULA (14NM)
Leave Mljet heading west to eastern point of Korcula. In the swimming season take a break in Przina cove, situated three quarters of a mile westward from Raznic promontory. There is a sandy beach surrounded by vineyards. Alternatively proceed to islet of Badija. One of anchorages is southward of Badija. Building on the islet is an old Franciscan monastery, it used to be sports centre but is now empty and run down.
Korcula town is known as the little Dubrovnik and is recognisable by its round defence towers and cluster of red roofs. It is one of the best preserved towns from the Middle Ages in the Mediterranean area and it is also the alleged birthplace of Marco Polo. Since time immemorial the inhabitants of Korcula have been known as skilled stonemasons, shipbuilders and seafarers. Moor at ACI marina. Full facility.

4 DAY
KORCULA - PLANJAK ISLET / (LENGA) - POLACE (14 NM)
Sail back to Mljet Island and after half hour make a break by islet of Planjak. Find anchorage on shallow water westward of islet. If you prefer sailing during morning continue directly to Polace bay on Mljet Island. Enter to bay of Polace in between Hr Kula (rock with light on it) and islet of Kobrava.
Southward of Lenga Promontory (northwestward of Tajnik islet) is nice anchorage for swimming break. In the afternoon find mooring at the quay on the south side of the bay, or if you prefer quietness anchor in north-west part of bay. Pay attention on the rock just to northeast of the ruined palace.
Port authorities will charge you for mooring (approximately half price of marina) but if you take private mooring in front of small restaurants it is included in price of dinner. Facilities - bars, shops and restaurants. No water.

5 DAY
POLACE - PRAPRATNO / (OLIPA) - SIPAN (21 NM)
This day, after a night in Polace, will be spent sailing along Peljesac peninsula. Enter to Prapratno cove for lunchtime stop, where is excellent for swimming. Otherwise you can anchor half mile northwestward of Olipa islet, by shore of Peljesac peninsula or if sirocco blowing, do that at northwest cove on Olipa islet.
At the afternoon proceed to Sipan Luka, quiet village, main harbour of the island. Number of places on the pier is limited. If you moor near ferry pay attention on swirl produced by ferry whilst manoeuvring.
Facilities - minimarket, bar, restaurants. No water.

6 DAY
SIPAN - SUNJ / (KOLOCEP) - DUBROVNIK (15 NM)
Sail back to Dubrovnik. Sunj is nice sandy beach and anchorage on eastern side of Lopud island, it is well sheltered from winds blowing from W and NW. Avoid it when blowing from E and SE, if is so you can proceed to eastern bay of Kolocep islet. There is another 5 - 6 miles sailing to ACI marina Dubrovnik.

Routes on the middle Adriatic sea - 2...