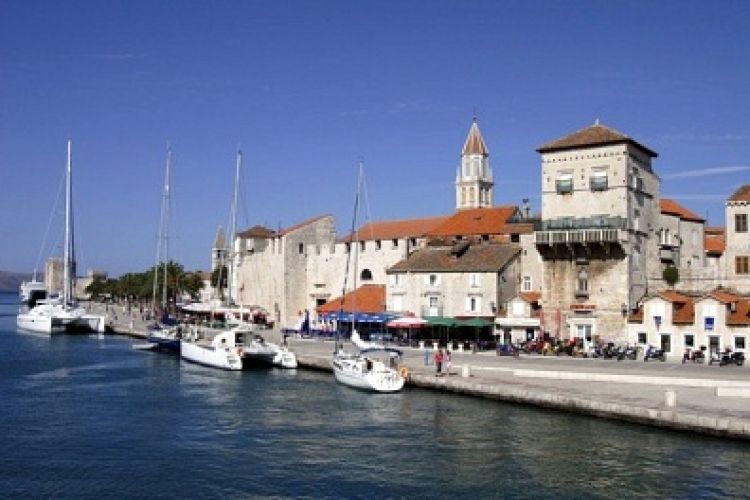 1 DAY
TROGIR - KRKNJASI ISLETS - SESULA COVE - SASKINJA ISLETS - ROGACIC COVE - VIS.
Leaving Trogir you start to think about stopover options on the way to Vis. After six miles you have opportunity to swim on the anchorage in between Krknjaši islets. It is well sheltered from winds blowing from W and NW. Avoid it when blowing from E and SE, if is so you can proceed to anchorage northwestward of Saskinja islet, also nice place for swim brake. Ten minutes separates you from the cove of Sesula nature's sheltered anchorage. If you would not like to stop at the beginning of the leg, choose 23 miles far Rogačić cove on the Vis island. It is quiet small bay just two miles away from town of Vis, where you going to spend night. Find mooring in the SW part of the harbour. Mooring lines, fuel electric power. Water in limited supply. *Before then you set off Vis, take look at weather forecast, and be sure that you would not be caught in strong SE. In the case of sirocco we suggest you to change itenerary. Turn your bow towards Stončica cove, well protected anchorage and very good departure point to reach Palmižana.

2 DAY
VIS - TIHA COVE - BISEVO ISLAND - KOMIZA (10 NM).
During stabile weather conditions the destination for today will be Komiža, small fisherman's town, eleven miles from Vis. First head for Tiha cove, where you can stay on anchor till early afternoon. Keeps on mind that number of berths in Komiža are limited. Breakwater is fitted with mooring lines as well as electric power and water.

3 DAY
KOMIZA - BUDIKOVAC ISLET - ZAGLAV COVE - STONCICA COVE - VINOGRADISCE COVE - PALMIZANA (23 NM).
Depending of weather and your mood, choose day stop. You should not miss island of Bisevo and its renowned Blue Cave on the east shore. Another option to stop ashore island of Vis is a Budikovac islet or Zaglav. Otherwise proceed to 22 miles far Vinogradišće cove on St. Klement island, then to Palmižana ACI marina. Water in limited supply, showers, and electric power. Hvar is medieval town on same named island, two miles away from Palmižana. For visiting, you have two options. First is to take small ferry from Palmižana, second is to take a day from itinerary and come with your boat not later than 1400h, and wait for berth place. Drop the anchor with maximum chain, sand bottom does not hold so well. Pay attention on mooring lines of local boats. Don't even think of staying in Hvar during SE and S winds. Port authority charges you for berth. Water on pier.

4 DAY
PALMIZANA - PARJA COVE - ZUKOVA COVE - VRBOSKA (22 NM).
Next destination depends of your stopping in Hvar. If you spent a night there, plan to sail to Milna till evening. Otherwise turn your bow towards Vrboska. A mile and half around Pelegrin cape, you can take a break in Parja cove, or proceed to nine miles far Žukova cove, also nice place for anchoring. There are another seven miles to be sailed along shore to Vrboska, village situated at the head of a long, narrow cove. ACI marina is on outer part of the cove. All facilities.

5 DAY
VRBOSKA - BLACA COVE - MILNA (20 NM).
This day, after a night in Vrboska, will be spent sailing to Brač. Cross the Hvar channel and try finding a cove to take a break. Blaca is nice one, but not protected from SE winds. When sirocco pick up, keep on heading to promontory of Ražanj, and anchor a mile westward of Milna. In the evening take a mooring in ACI marina. All facilities.

6 DAY
MILNA - NECUJAM COVE - TROGIR (19 NM).
Necujam can be stop over on the last leg of your cruise. It is a very sheltered cove situated on the north part of Šolta Island. Anchorage is on the head of a cove. Pay attention on submerged walls at the bottom of the cove. Those walls are remains of Roman fish farm. There are twelve miles left to reach Trogir.

Routes on the middle Adriatic sea - 2...

Recommended route on the north Adriatic...